Interesting history of the Faculty of medicine Comenius University in Bratislava

Interesting history of the Faculty of medicine Comenius University in Bratislava 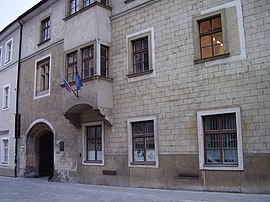 The Faculty of Medicine of Comenius University in Bratislava has been an important part of the history of university education in Slovakia since its inception in 1919. But do you know that the roots of the Comenius University itself date back to the 15th century?
At that time, Academia Istropolitana (also known as Universitas Histropolitana), the first university in Hungary, was inspired by famous Bologna University, began to operate in Bratislava. University managed to exist just for a short period of time. In spite of that, it helped to spread ideas of humanism in central Europe.
As a result of the efforts to restore the University of Bratislava at the end of the 19th century, the Royal University of Elizabeth was established in 1912. Its faculty of medicine was founded in April 1918. Classes for students of 3rd-5th year started in the winter semester of the academic year 1918/19. The first auditoriums were in the premises of the State Public Hospital in Mickiewiczova Street no. 13. In the newly-established Czechoslovak Republic, the University of Elizabeth was abolished by a regulation. Nevertheless, initiatives to establish a university with teaching in Slovak language were still running.
These efforts culminated on June 27, 1919, when the Act no. 375/1919 established the Czech-Slovak State University in Bratislava. Teaching languages were Slovak and Czech. In November 1919, the university was named after an important pedagogue of a world name: Jan Amos Komensky, known as the teacher of nations.

The first professor’s at the Faculty of Medicine of the Comenius University were previously working at the Charles University in Prague. In next years, University managed to educate and prepare its own teachers and professors.
The University in Bratislava was in the middle of interest of students not only from Slovakia, but also from abroad. At the beginning of the 1930s, international students formed almost half of the students.
Since the first years of its existence, the staff of clinics and institutes have maintained intensive working contacts not only with Prague and Brno colleagues, but also with several renowned foreign medical faculties, Scientific medical institutions in Paris, London, Berlin, Budapest and Vienna. The Faculty has very vivid and active cooperations with universities from all over the world up to today – Faculty is involved in Erasmus program, signator of the Memorandum on Academic Cooperation between University of Michigan and Comenius University Faculty. In 2006 the Program of Slovak-American Academic Cooperation was launched for exchange of medical experts between the USA and Slovakia.
Since 2007 the International Mobility Centre has been an integrative part of the CUFM, developing and supporting international academic initiatives for the benefit of undergraduate and postgraduate students and staff.
After November 1989, the Academic Council was formed at the faculty as one of the first within the former CSFR universities, later renamed to the Academic Senate of the Charles University (first session 11.1.1990). In 1990, the faculty returned to its original organizational structure, which currently consists of 73 institutes and a clinic.